FNHL began 10 years ago. It is a program that is a branch of the DBYLC, which is the Don Bosco Youth Ladership Center in Rivière-des-Prairies. The leader of this program is Joesph Macchiagodena, he has been a part of the DBYLC for many years and he has been the one in charge of FNHL for it's entire existence. When Joe first started the league there was only four teams, the nets had to be built and taken down each week, and there were only eight coaches. Since then, the league has evolved and many new waves of leaders have come and gone. Waves are what we call the new people coming in to FNHL and becoming leaders. In ten years, there has been five new waves, which means that new leaders come about every two years, and the older leaders haven't left, which means a surplus of them. This is a good problem to have because it means that we have a big family at FNHL, and this problem also caused Joe to think about and create new roles. So as I said before, FNHL began with only eight coaches, now FNHL has eight coaches, six-teen general managers, and eight owners. All these titles are ways of keeping everyone around, because FNHL is like a family, a big, dysfunctional, family. This year we are celebrating ten years of existence and ten years if family, it is a bog milesotne for us. 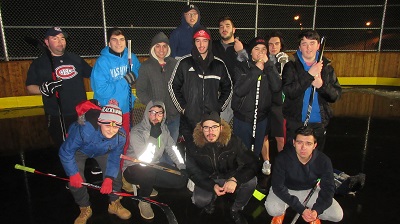